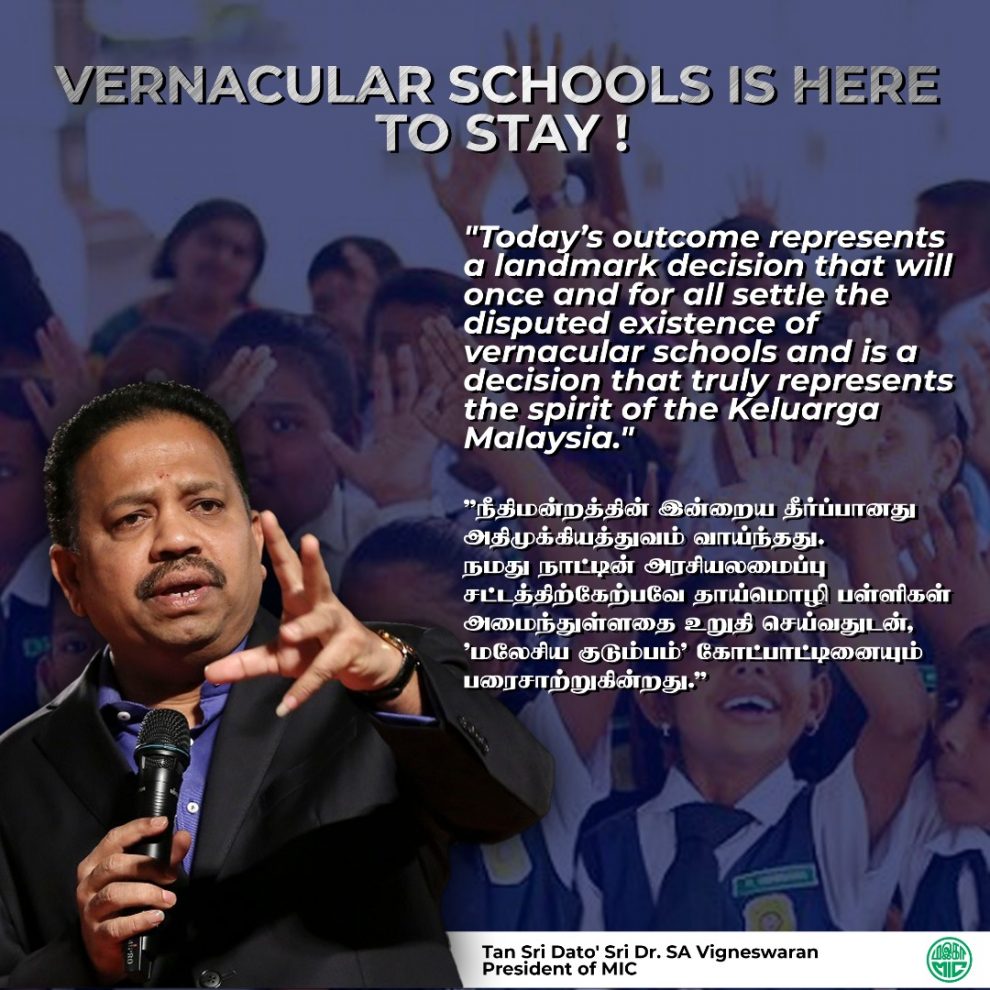 High Court judge Yang Arif Tuan Mohd Nazlan today  delivered the decision in regard to a suit filed by the Federation of Peninsular Malay Students (GPMS), the Islamic Education Development Council (Mappim), and the Confederation of Malaysian Writers Association (Gapena) in December 2019, who were seeking a court declaration that the existence of vernacular schools goes against the provisions in the federal constitution as Article 152(1) of the Federal Constitution defines Malay as the national language.

MIC along with 13 other organisations  had  intervened and joined the suit as Defendants to defend and uphold the existence and constitutionality of vernacular schools.

The decision follows a hearing that was held in November 2021 in regard to an 0.14A Application (Summary Disposal) filed by the Attorney General. In support of the Attorney General’s application, MIC had filed submissions to substantiate the stance that Vernacular Schools are indeed constitutional. MIC was represented by Vasanthi Arumugam and Vischaal Yogaratnam from Messrs Vas & Co.

The premise of the application was pertaining to the determination of two questions of law, which are:-
i.Does Sections 2, 17 And 28 of the Education Act 1996 (Act 550) contravene Article 152(1) Of The Federal Constitution? ; and
ii.Are the establishment and existence of Chinese and Tamil medium schools in contravention of Articles 5, 8, 10, 11 and 12 of the Federal Constitution?

The High Court today decided in the negative in regard to both questions.

The court had also held that vernacular schools do not fall within the ambit of a public authority. Therefore the use of the Chinese and Tamil languages as the medium of instructions in schools is held to be constitutional.

Justice Nazlan also held that the Plaintiffs have not shown in what manner the establishment and existence of the vernacular schools have violated the fundamental liberties of any person guaranteed in the said Articles.

“Enrolment in a vernacular school is after all a matter of choice. It is difficult to see in what fashion the establishment and existence of Chinese and Tamil vernacular schools would infringe the fundamental liberties or rights of any person under the constitution,” His Lordship added.

The complete written decision from Yang Arif Mohd Nazlan will be provided in due time, which will extensively highlight the grounds for his decision.

Today’s outcome represents a landmark decision that will once and for all settle the disputed existence of vernacular schools and is a decision that truly represents the spirit of the Keluarga Malaysia.