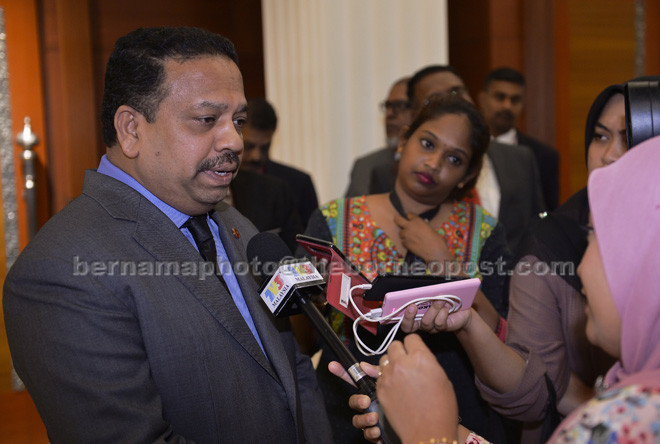 KUALA LUMPUR (Bernama): MIC has questioned the removal of Tan Sri Annuar Musa as the Barisan Nasional secretary-general on Tuesday (Jan 5) without consultation with all component parties in the coalition.

“The removal of Tan Sri Annuar Musa is legitimate, but you cannot appoint anybody as a secretary-general unless it is done through Barisan’s supreme council,” said Vigneswaran.

It was reported that Annuar, who is also Federal Territories Minister and Ketereh MP, was removed as the BN secretary-general yesterday, and Ahmad Maslan was appointed to the position.

BN is led by UMNO with the other component parties being MCA, MIC and Parti Bersatu Rakyat Sabah (PBRS).

Meanwhile,, MCA also expressed surprise about Annuar’s removal as BN secretary-general, saying  the component parties were not consulted nor the decision made by the BN MT.

“In MCA’s view, any appointment to a post in BN, it must be done based on BN’s constitution and according to convention, should be tabled and a consensus reached  in a BN MT meeting,” the party said in a statement.

“No agreement …no consensus from BN MT, that is from PBRS, MIC and MCA,” he said when contacted by  Bernama.

He added that each component party in the coalition must heed the rules stipulated in the BN constitution.