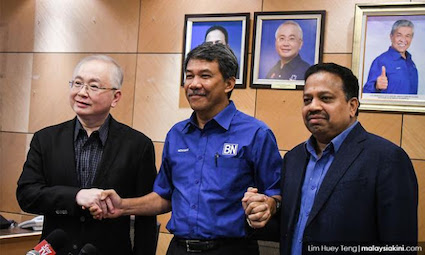 Taking a different stand from its MCA counterpart Wee Ka Siong who recognises BN as the only coalition, MIC president SA Vigneswaran (above), when asked on the party’s willingness to join the PAS-Umno collaboration, said: “Yes, of course.”

“MIC is very much in favour of joining, and MCA is very much with their principle that as long as it doesn’t contravene the constitution, why not,” he said. Mohamad had told the media that Muafakat Nasional’s technical committee is exploring its options as a coalition.

“No, no. We only appear in one coalition, that is BN. I don’t understand what you are saying about a new coalition.

“I said it in my policy speech, it is purely the spirit of opposition togetherness..My interpretation of Muafakat Nasional – it is not something that you have to apply to be a member, but anyone who wishes, who subscribes to the idea, even Sarawakians, Sabahans, and those want to contest together,” Wee said.

Yesterday, when asked whether MCA would join Muafakat Nasional following BN’s victory in Tanjung Piai by-election, the party’s deputy president replied with a sophistical answer. “Politics is like life. It is unpredictable, you cannot say for sure what will happen tomorrow,” he said.