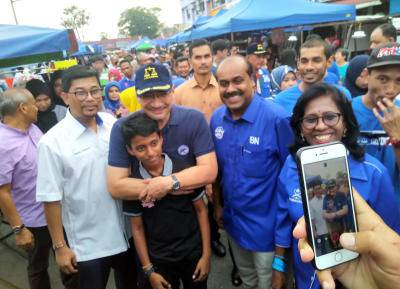 Vidyanathan said that the role of the representatives were very important and they should have been appointed the moment the Johor Mentri Besar Datuk Dr Sahruddin Jamal took up the role.

“If they are really committed in taking care of the Indian community, they should have done this so much earlier.

“Not months later, after the issue had been raised during the by-election here,” he said when met during a ceramah with the Tanjung Piai Indian community here in Rimba Terjun.

He said this when asked about the recent appointment of two Mentri Besar’s special officers for the Indians in the state.

Dr Sahruddin Jamal has earlier given his assurance that he will serve people of all races in the state fairly and no one will be left out.

He said he had already appointed two special officers who are from PKR to handle the issues.

This comes after the issue have been highlighted during the by-election campaign period here.

“To date, we have identified almost 80% of the Indian voters here, including those residing outside the area.

“Although Indian voters here make up only 1% out of the total number of voters, but these 538 voters could make a huge impact in this by-election,” he said, adding the number was similar to the majority that Pakatan Harapan has won in Tanjung Piai during GE14.