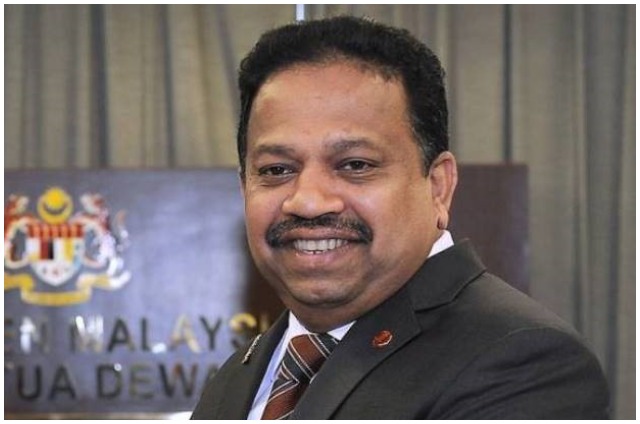 KUALA LUMPUR — Senate President Tan Sri SA Vigneswaran today presided over what would be his last senate sitting before his term as senator ends on June 22.

In his final speech, Vigneswaran said it was indeed an honour to hold the post, which came with a very heavy responsibility for him to think and act in a fair and just manner.

“To be a Senate president with a quality of being just and fair, I spent a lot of my time studying the Federal Constitution and the relevant Standing Orders as well as seeking legal advice from time to time.

“During my tenure, I am still active in politics as the MIC President. But I always stand firm on the non-partisan principle in managing the senate based on the Standing Orders to ensure that the president’s chair will always be respected,” he said when presiding over the sitting today.

The senate sitting was held after the opening ceremony of the Third Session of the 14th Parliament graced by the Yang di-Pertuan Agong Al-Sultan Abdullah Ri’ayatuddin Al-Mustafa Billah Shah at the Dewan Rakyat.

In his speech, Vigneswaran also touched on the Senate Reform agenda which was carried out during his tenure, which had seen the setting up of the Senate Reform Working Committee, the Senate Caucus, as well as proposal to revive the Parliamentary Service Act 1963.

He also expressed appreciation and gratitude to all senators and Parliament staff who had been very helpful in ensuring the senate sitting was held in an orderly manner.

“My fervent hope is that the new Senate president will continue the good efforts, uphold the principle of neutrality and keep empowering this beloved upper house of the legislature.

“I am also proud to have been able to serve under three Yang di-Pertuan Agong, three prime ministers and three government coalitions,” he said.

The sitting was adjourned after his speech.